What is this product?

You should only buy products that have been tested by a certified laboratory, for potency, purity, <0.3% THC std. and traceability.

CBD is only one of 85 Cannabinoids that can be harvested from the hemp plant.

It is thought that additional amounts of CBD will interact with your naturally produced CBD to enhance its capabilities.

CBD is one of the two most important non-psychotropic cannabinoid components of the cannabis plant. This plant produces more than 400 organic compounds that act on our body in different ways.

Hemp production is legal in all 50 states in the USA, there are many products produced from hemp and CBD is one of them.

“Cannabidiol (CBD) is the second most prevalent active ingredient found in cannabis and derived directly from the hemp plant, is non-psychoactive, and can mimic molecules found in the endocannabinoid system found naturally in the human body”, explains Dr. Matthew Halpert, Ph. D.

All cannabinoids, including CBD, produce effects in the body by attaching to certain receptors.

The human body produces certain cannabinoids on its own. It also has two receptors for cannabinoids, called the CB1 receptors and CB2 receptors.

CB1 receptors are present throughout the body, but many are in the brain.

The CB1 receptors in the brain deal with coordination and movement, pain, emotions, and mood, thinking, appetite, and memories, and other functions. THC attaches to these receptors. 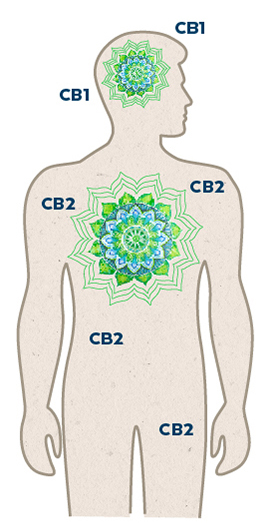 CB2 receptors are more common in the immune system. They affect inflammation and pain.

Researchers once believed that CBD attached to these CB2 receptors, but it now appears that CBD does not attach directly to either receptor.

Instead, it seems to direct the body to use more of its own cannabinoids.

The FDA has only approved CBD for the treatment of two rare and severe forms of epilepsy.

**These statements have not been evaluated by Food and Drugs Administration. This product is not intended to diagnose, treat, cure or prevent any disease.

This website uses cookies to improve your experience while you navigate through the website. Out of these cookies, the cookies that are categorized as necessary are stored on your browser as they are essential for the working of basic functionalities of the website. We also use third-party cookies that help us analyze and understand how you use this website. These cookies will be stored in your browser only with your consent. You also have the option to opt-out of these cookies. But opting out of some of these cookies may have an effect on your browsing experience.
Necessary Always Enabled
Necessary cookies are absolutely essential for the website to function properly. This category only includes cookies that ensures basic functionalities and security features of the website. These cookies do not store any personal information.
Non-necessary
Any cookies that may not be particularly necessary for the website to function and is used specifically to collect user personal data via analytics, ads, other embedded contents are termed as non-necessary cookies. It is mandatory to procure user consent prior to running these cookies on your website.
SAVE & ACCEPT